A place takes on meaning for people when they become attached to it. The sights, sounds and smells make a powerful imprint on our memories; they help us connect to an area. We develop a sense of place based on our experiences, and the shared culture and folklore associated with those experiences. Many residents of the Black Hills region identify with the Tower because of the sense of place that has been cultivated by using the land as a gathering spot for many generations. 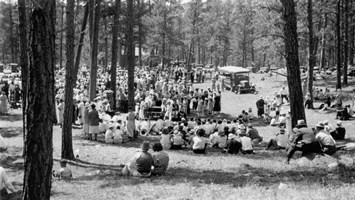 People would gather by the thousands every June at Devils Tower National Monument.
NPS Photo

Modern gatherings at the Tower can be traced back to 4 July 1893, when William Rogers and Willard Ripley promoted their climb to the summit of Devils Tower. Although people continued to use the Tower as a gathering place every summer, it was not until 1932 that a local group officially organized the Old Settlers' Picnic. The event would draw thousands of people, and offered locals a chance to see their family, friends and neighbors. These Old Settlers' Picnics typically occurred during the month of June, and continued into the 1960s. The tradition was revived for the monument's centennial in 2006. Today, the Devils Tower Natural History Association hosts the annual event; highlights include guest speakers, poetry, music, food and family fun. The Old Settlers' Picnic typically happens during the last weekend of June. Check the Association's website or the park's online event calendar to find out when this year's event will happen.

Be the first to know about upcoming sales, events and activities.

Item(s) added to your cart